The modern age has really brought us a lot of technological advances, encompassing even in the music industry. From the dawn of CD players and compact discs comes the easy streaming and downloading of any music online.

And while most people think that these advancements brought the end of the analog era with them, the vinyl records are back on-trend and here to stay. They offer features from our roots but also with a modern twist.

So, if you are one of the avid vintage turntable enthusiasts, look no further than the best victrola record players.

Victrola And A Brief History

Victrola is one of the oldest brands in the music industry as a reputable manufacturer of audio equipment.

Founded in the year 1906, Victrola has survived and seen a lot of changes in technology, collecting a century worth of experience under their belt.

Using only the highest quality of materials, Victrola now focuses on home entertainment. They offer a range of products in different styles. However, their retro styling is the most prevalent.

And by retro, we mean record players that look like the ones from the 60s but will never look out of place in this modern era. So, if retro is your thing, then you will love Victrola’s record players. Plus, you will see that most of their vintage-looking players are also multi-functional and rich in features. They utilize modern technologies to give you the best sound experience ever.

If you want something to give you an all-in-one entertainment, then this Victrola model is your best bet. Boasting a 4.3-star rating with over 2,000 reviews on Amazon alone, the Victrola Nostalgic is a great buy for every turntable enthusiast.

With a cheap price tag, the turntable accommodates a variety of music sources from the old-school CD, vinyl, FM radio and cassette to the modern streaming with its Bluetooth connectivity as well as an Aux input to connect a phone or a media player.

In addition, the convenient line out ports at the back allows for an easy connection to a speaker set up or another audio system. For vinyl playing, the turntable can be set to 3 speeds— 45, 33 1/3 and 78 RPM s you can play all your favorite vinyl records.

The record player is available in several vintage colors including Mahogany, Graphite, Espresso, and Farmhouse Oatmeal.

Unless you need something that will endure rough handling, the Vintage is one of the best feature-rich models in the Victrola line-up. It provides you with both wireless and wired connectivity features, making it one of the best home entertainment package. 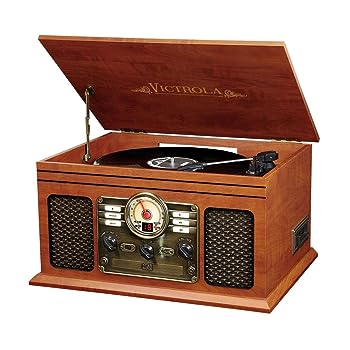 The Brookline is another 6-in-1 record player from Victrola that features a sophisticated finish with its shiny gold accents. Combing the traditional feel of Farmhouse style, this record player comes with the option to play vinyl, CDs and cassette tapes.

If you want to listen to some modern music, you’ll be glad to know that this turntable also allows you to stream via Bluetooth connectivity. Then there is the Aux output that allows you to play via phone or other media services.

If you need to listen to the news or local stations, the built-in radio will handle that. The headphone jack allows an immersive sound experience and even a connection to other sound systems.

Unlike the previous Victrola model, the Brookline comes with all ports and controls in the front for better access. The mode knob allows for easy switching between input modes and even comes with LED lighting for visibility. 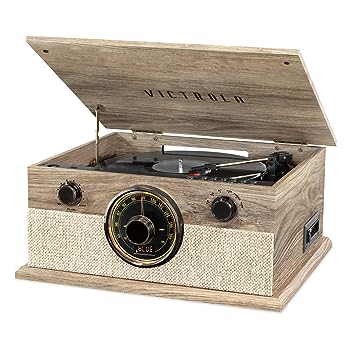 At first glance, the Navigator looks similar to the Vintage 6-in-1 variant. However, this one packs a few extra features you will love. Like the previous models, the Navigator allows you to use CDs, cassettes and vinyl. It also allows you to listen to local music with its radio antennae and even comes with Bluetooth connectivity as well as the aux input.

The extra features it has includes a USB input for you to play music and songs from the USB driver directly. You also have the option to record your vinyl and converting it to MP3, so you can listen to it on your phone or other devices.

Its speakers already provide clarity and power for the size. However, if you want more, then you can always connect it to a speaker with its line pout ports placed at the back. Plus, the Navigator also comes with remote control for your convenience. 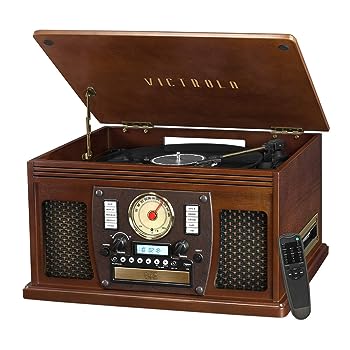 As you can see, the Victrola record players offer you a hint of vintage-ness while also bringing you a touch of modernism that you simply can’t without. Not only that, but Victrola also ensures that their record players offer multi-functionality, offering you all-time value for your hard-earned cash.

Other Good from Amazon